A trading update was released by Woolworths Holdings Limited on Thursday. For the first time in years the company’s like-for-like food sales volume was negative and its like-for-like clothing sales volume was also negative. The retailer’s domestic food sales for a 20 week period advanced 4% less than the comparable period of 2013. Clothing sales growth slowed by 2,2% from a year earlier. Woolworths shares dropped as much as 4.9% after the release of Thursday’s trading update –  the steepest intraday fall since April 9 2014. Woolworths issued the trading update in anticipation of its Annual General Meeting (AGM) to be held on 26 November 2014. Woolworths Holdings Limited owns Woolworths in South Africa and David Jones in Australia. (Read more) 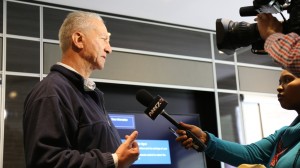 Yesterday at the Maslow Hotel in Sandton a group of Woolworths shareholders announced their support for the #BoycottWoolworths campaign.
A group of black businessmen (see alongside), Alan Horwitz representing a group of Jewish shareholders (picture above) and a Stellenbosch author and writer (see alongside) were amongst those who announced their backing of the growing consumer boycott campaign calling on Woolworths to terminate its Israeli relations.Click here for more information on the recent Woolworths shareholder press conference. (Read more) 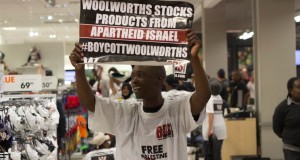 South African retail and corporate giant Woolworths (that owns David Jones Stores in Australia) is taking the Palestine solidarity and human rights organisation BDS South Africa to court over the Israel boycott.
The use (or rather, abuse) by Woolworths of our courts to force an end to the non-violent #BoycottWoolworths campaign is unnecessarywhen this issue could easily have been resolved if Woolworths had accepted the numerous requests by BDS South Africa and the NC4P to meet and resolve this issue. The company’s resort to using the courts is an indication of the growing impact of the #BoycottWoolworths campaign. (Read more) 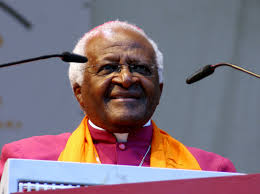 On 10 September 2014, an op-ed article by Likud SAchairman Leon Reich was published by the South African Jewish Report (SAJR). This article compared Nobel Peace Prize laureate Archbishop Emeritus Desmond Tutu, to Nazi leader Adolf Hitler. An image of Desmond Tutu’s face with a ‘Hitler-style moustache’ drawn onto it, was superimposed over Tutu’s face. As South African Jews, we are hurt by this article and reject in the strongest terms the utterly false and hateful words directed against a man who is regarded as a beacon of morality by the majority of South Africans, including ourselves. (Read more) 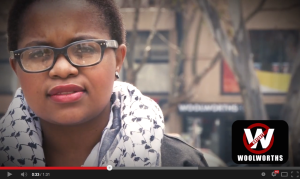 BDS South Africa thanks and commends the thousands of consumers who have heeded the call to boycott Woolworths (until it ends its trade relations with Israel). We also commend the activists, community members and supporters who have in recent weeks organized protests, pickets, till-jams and other creative protest actions at Woolworths stores across the country. (Read more)

Woolworths is being called-on to take the lead in ethical retail business, to respond to the call from its consumers, to be on the right side of history, to respect the international boycott of Israel and end its over 12 million rand worth of trade with Israel. (Read more)