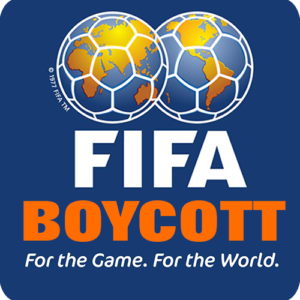 Israel has set up six soccer clubs in illegal Israeli settlements on illegally occupied Palestinian land. FIFA laws prohibit using another country’s land without consent, and South African FIFA official, Tokyo Sexwale, is part of a FIFA investigation as to whether these teams should be allowed to participate in international football.

The Israeli Football Association must either remove the settlement football clubs from its membership or must lose its membership with FIFA, as has been the case with other federations that have refused to accept FIFA’s fair play rules in the past.
(Read more)

A senior United Nations official, Wilfried Lemke (the UN special adviser on sport for development and peace) has written to FIFA to reiterate that the UN regards Israeli settlements – and by extension Israeli football teams that play in them – to be

THE NATION MAGAZINE: ITS TIME TO KICK ISRAEL OUT O...

Sean Jacobs, editor of Africa is a Country and co-editor of “Apartheid Israel: The Politics of an Analogy” together  with Aubrey Bloomfield of the New School in New York City have written that: “This may be the year in which sport, espe

#BlackLivesMatter has declared war on what it terms Israeli “Apartheid”. The movement has prodcued a detailed policy platform with six focus areas, one of which includes full support for the international BDS boycott of Israel. #BlackLivesMa

Joud Fahmy,  a Saudi Arabian judo athlete refused to participate in her first-round match at the Summer Olympics in Rio Sunday, reportedly to avoid an Israeli competitor in the next round. It has been speculated that Fahmy may have withdrawn from the mat

Egyptian Hero Islam Mahmoud has withdrawn from the...

Egyptian Hero Islam Mahmoud has withdrawn from the Olympics after refusing to compete against an Israeli competitor. That’s solidarity with the Palestinians……. read more

“The flag of ‪#‎Palestine‬ was carried into the Olympics by a [Palestinian] woman. To us Palestinian men, this is no surprise. We have known for quite some time that our women are in charge. Also, Palestine has sent two swimmers to the Olympic

22 July 2016 Deputy Minister in the South African Presidency, Cde. Buti Manamela, will be walking for Palestinian children at the upcoming 702 Walk the Talk taking place in Johannesburg on Sunday 24 July. Manamela will form part of a team led by the human