Palestinian youth activists Janna Jihad (11) and Ahed Tamimi (16) are in South Africa on a two week speaking tour. They are being hosted by various organisations with events in several cities. Click here for a SABC TV news clip with Jihad and Tamimi at the Hector Pieterson Youth Museum in Soweto.

We welcome Jihad and Tamimi to our country. They remind us of our own brave youth who were at the forefront of the struggle against apartheid. More information is available from the organizers of the Shamsaan PalS4Peace tour, click here for their website. 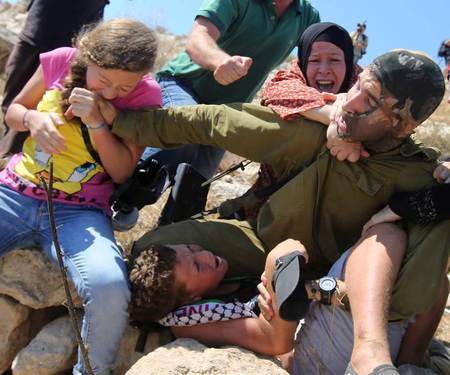 In 2015 a video went viral of an Israeli soldier pursuing a young Palestinian boy and pinning him to the ground.

The 12 year old Palestinian child, who’s one arm was broken and in a sling, was accused by Israeli soldiers of throwing stones.

However, the Israeli soldier’s attempts to arrest the young boy were thwarted by the arrival of his sister, Ahed Tamimi (who is currently on tour in South Africa), as well as other family members including his mother and cousin who fought off the Israeli solider. Click here for the video.
Previous Next