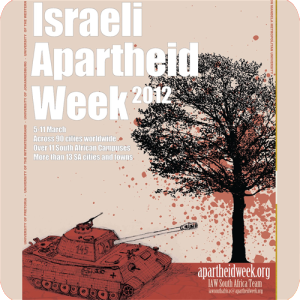 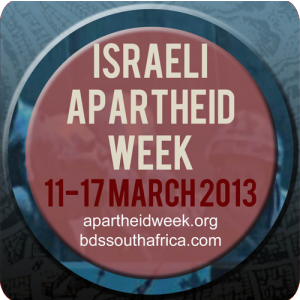 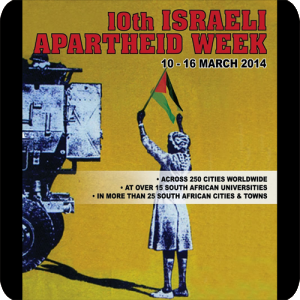 Israeli Apartheid Week (IAW) is an annual international series of events (including rallies, protests, lectures, cultural performances, concerts, films and workshops) held in over 250 cities, communities and campuses across the globe. Its endorsed in South Africa by more than 75 organizations, trade unions, political parties and other groups (see below for full list of IAW endorsers).
The aim of IAW is to raise awareness of Israel’s apartheid policies towards the indigenous Palestinians and serves to garner support for the non-violent Boycott, Divestment, and Sanctions (BDS) against Israel campaign, which seeks to bring an end to Israel’s apartheid policies and violations of international law. The 11th International Israeli Apartheid Week (IAW) will take place in South Africa between the 2nd and 8th of March 2015.

For South Africans and our liberation, people of the world mobilized in their hundreds of thousands – if not millions – during the 1980s: they held protests, rallies, concerts, free Mandela events, lectures, film screenings and a host of other events and campaigns to raise awareness of Apartheid South Africa’s racist policies and to build support for the boycott, divestment and sanctions campaign against Apartheid SA. Today we have the opportunity to “give-back” by joining the international movement in solidarity with the indigenous Palestinian people (and their progressive Israeli allies) who are struggling against Israeli Apartheid – participating in Israeli Apartheid Week (IAW) is one such form of solidarity.